After getting their first point in the league, The Red Devils will try to get their first win with the support of their fans. The Cobblers don’t want to fight for the lead, so they will go for the three points. To set the right bet for Crewe Alexandra vs Sutton United, read about our predictions and betting tips for free:

Despite Crewe Alexandra’s poor performance last time out, we think they will bounce back when they play in front of their home fans, so we predict a win for the home side. There is no history of recent meetings between Crewe and Sutton, so this will be a unique battle.

Despite Sutton’s inconsistent results, it has been difficult for their opponents to score against them their goals per game average is just 1.00. Their attacking ability is a little limited, as is their next opponent who failed to score in either of their last two games. We deduce that there won’t be many goals in this League Two matchup.

If we include the EFL Cup match where The Alex were beaten 4-0 and the previous league matchday, that’s two games in which Crewe didn’t score once. On the other hand, Sutton’s goal average is just 1.00 per game. We think that one of the two teams will not score, in fact, it would not be unusual if neither team scores.

The Alex lost their unbeaten run in the tournament, after winning the first two games, to Salford City 3-0. It was a humiliating defeat, as Alex Morrison’s side did not have a single shot on target. Had it not been for goalkeeper Arthur Okonkwo, who made three important saves, the goal difference could have been greater.

The Us had a difficult match against Barrow, in which neither team felt comfortable playing their game. The opposition had more possession, but it was Sutton who had more and better scoring opportunities. They finished with six shots on target, while their opponents had just three. In the 79th minute, Tope Sadahunsi scored the only goal of the game to give Matt Grey’s side their first win.

If you want to bet on the top odds for Crewe Alexandra vs Sutton United, check our selection of odds from the best betting sites: 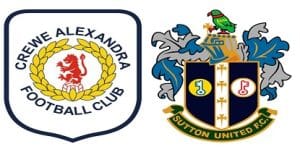 Who is the host? Crewe Alexandra is the host at Mornflake Stadium in Crewe

Who is the bookmakers’ favourite to win? The more probable winner is Crewe Alexandra at 5/4 (2.25) odds