Let’s go over the League One fixture between Charlton and Crewe to find the best betting tips and odds for the match. If you are interested in seeing more League One predictions, you can check out our website’s latest content.

We gave our experts time to come up with the best free betting tips for the Charlton vs Crewe fixture and this is what they gave us:

Odds from Betfred are subject to change. This means that they can change at any time, so you have to double-check them before wagering.

Charlton and Crewe are currently at the twenty-first and twenty-second position in the League table with only one point, so far, for this League One season. Their form is among the worst, but against each other, we can take a look at their head-to-head data. Charlton won four of the last five fixtures they played against Crewe, and two of the last three home games.

Crewe is one of the worst teams this season with only one point scored, so far. Considering we are expecting them to lose against Charlton, we think they will keep the bottom table placement for a while, at least until they don’t improve their form. The only thing they have going for them is that there are no injured or suspended players on the squad.

Charlton isn’t much better than their opponents because they also have only one point, and these three points will be very good for them. If things go well, they could end up at the middle of the table and get a chance for a higher position, if they improve their form in the future. The team doesn’t have any injuries or suspensions.

In the tables below, you can check out the most recent scores, match histories, and stats for the Charlton vs Crewe match on Saturday. 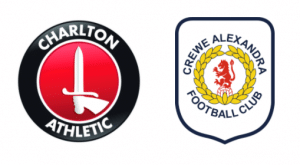