El Ferroviario came up empty-handed in their visit to Banfield, so they will try to compensate with a win at home. El Ciclon was close to losing against Arsenal but a double from Cristian Colman allowed them to take at least a point.

To set the right bet for Central Cordoba vs San Lorenzo, read about our predictions and betting tips for free:

2 wins for the home team and 1 for the away team is the most recent record between the 2 clubs. They have not played each other this season, so any result is possible. Central Cordoba has made good performances in other teams’ fields and won their previous home game against the current champion, so we expect them to do the same against San Lorenzo.

Although on the first matchday both teams started with a poor goal average, on the last matchday, there was a great number of goals in their respective duels. We hope that this time there will be more than 2 goals in the final score.

Each team has a high BTTS score in their last meetings, 75% for the host and 90% for the guest.  So both are likely to score at least once.

Despite the bad result the previous day, El Ferroviario had a great performance in their visit to Banfield. The game was very even in possession, but Central made better use of the ball to create scoring opportunities. The first half ended with Banfield leading 1-0, but Fransisco Metilli equalized in the 54th minute. When it seemed that everything would end in a draw, El Taladro scored the second from the penalty spot in the 81st minute.

The squad led by Ruben Insua came close to their first victory, but again let the three points slip away in the final part of the game, and had to settle for another draw. El Ciclón was leading 3-1, however, Cristian Colman, who had only been on the field for 8 minutes, scored a double to give Arsenal 1 point. So far, El Ciclón made its best performance of the season, although its rival had more shots, San Lorenzo had incredible accuracy in its shots.

If you want to bet on the top odds for Central Cordoba vs San Lorenzo, check our selection of odds from the best betting sites: 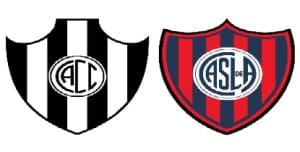 Who is the bookmakers’ favourite to win? The more probable winner is Central Cordoba at 10/11 (1.91)