So far, both teams have been irregular and have the same results, 2 wins, 2 draws, and 3 defeats. With 8 points from 7 matchdays, they are in the middle of the table, will either team be able to take advantage in this matchup.

Our Best Picks and Predictions for Central Cordoba vs Patronato

To set the right bet for Central Cordoba vs Patronato, read about our predictions and betting tips for free:

Head-to-head meetings between the two teams have had even results, with the home team usually winning. Patronato has not had a good time when playing away, so far they have 1 draw and 2 defeats.

Central look favourites in the odds, we think they can dominate the match at home. So we predict a win for the Ferroviario with a somewhat tight result.

3 of the last 4 h2h have ended with a low score. So far, Central has played 3 home games, and in 2 of them the final score was less than 3 goals, so we assume that this match will end with Under 2.5 goals.

In two of Ferroviario’s three games at the Alfredo Terrera Stadium, there were two clean sheets. In the current season, the average number of goals scored at this stadium is just 2 goals per game.

The Ferroviario played one of the most exciting matches of the previous day, which was full of goals. The odds were clearly in favour of Los Pincharratas, but Central struggled to get a draw at least.

The first half started as everyone expected, with Estudiantes clearly dominating, opening the scoring in the 11th minute, and then increasing the lead in the 36th minute. Fortunately, Central was able to break the deadlock before the break, and in the second half, took advantage of a penalty kick to level the score.

El Patron lost their 3-match unbeaten streak on the previous matchday, which had seen them take 7 points out of 9. Although their best results had come at home, Facundo Saba’s team lost 1-0 to Arsenal de Sarandi in front of their home fans.

Despite having 64% possession of the ball, Patronato failed to convert this into scoring chances, although they had more shots, most were wide. On the other hand, their opponents took every opportunity to hurt Patronato’s fragile defence if it wasn’t for the lack of accuracy from the Arse players, the goal difference could have been more significant.

Latest Preview of Central Cordoba vs Patronato Stats and Odds

If you want to bet on the top odds for Central Cordoba vs Patronato, check our selection of odds from the best betting sites:

FAQs for Central Cordoba vs Patronato 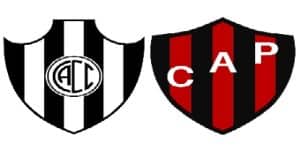 Who is the bookmakers’ favourite to win? The more probable winner is Central Cordoba at 20/21 (1.95) odds