Somehow Celtic could end this weekend top of the Scottish Premiership after emerging from nowhere over the last couple of weeks. Can they get the win they need to heap pressure on Rangers? Find out with our Celtic vs Livingston preview here along with the predictions and free tips we mention along the way.

Celtic to win and keep it clean

Celtic have an almost perfect record at home; they’ve gotten 13 points from a possible 15 at home this season. The most impressive thing is, Celtic have four clean sheets in those five home games and they’ve conceded just once. We’ve looked at the previous meetings between these two as well and Livingston have failed to score in four of their last five visits to Celtic Park. For that reason, we’re backing Celtic to win and keep a clean sheet.

Our next tip today will be on the “both teams to score” market. We’ve already established that Celtic have conceded just one goal in five home games this season. Celtic have also not conceded four of the last five times Livingston came visiting. Livingston have failed to score in four of their six road games. They’ve only scored against Ross County and St. Johnstone, two of the worst teams in the Premiership. At least one team has failed to score in three of the last four meetings between these sides. As a result, we’re picking both teams not to score.

There will be at least three goals

Our final pick will be on the over/under market. Celtic have scored 18 goals in five home games; that’s 3.6 goals per game on average. Livingston have been involved in a few high scoring games lately as three of their last five games have gone over. Meetings between these sides tend to go over too. Five of their last seven meetings have seen at least 3 goals. As a result, we think there will be at least three goals scored in this game.

The best odds for Celtic vs Livingston

Celtic have picked up a lot of speed lately. The Bhoys have gone all the way up to second in the table due to their four game winning streak in the Premiership. With just two points separating them from league leaders Rangers, Celtic can take the top spot with a win today. Ange Postecoglou’s men will be eyeing their sixth consecutive win in all competitions; Kyogo Furuhashi will be a key part of any win.

Livingston managed to hold off Dundee United on Wednesday, despite being short handed for the entire second half. The Lions have accumulated more points in their last three games (7) than they did in their first 8 games (4). Livingston will fancy their chances of extending their unbeaten run to four games when they visit Celtic Park today but will need Maks Stryjek in top form to have any chance.

The final word on Celtic vs Livingston 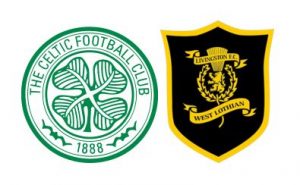