The Vozao turned the tide of this qualification in the final minutes of the first leg, now they have to finish the job in Brazil. The Bolivians failed at home but will go for an epic result to advance to the quarter-finals.

Ceara to Win to Nil

Our Right Picks and Predictions for Ceara vs The Strongest

To set the right bet for Ceara vs The Strongest, read about our predictions and betting tips for free:

Ceara to Win to Nil

The fluidity of Ceara’s play was hampered by the altitude at which they were playing, which was the exact reason why the Bolivian players dominated the game, as they are used to it. On this occasion, The strongest will not have the same advantage, and will probably come up against a more attacking Brazilian team. We expect the winning team to be the same as in the first leg.

The home team will start with a goal advantage, so they will not risk too much in the defensive zone, but they will try to score one or a couple of times to seal the qualification as soon as possible. We don’t think the Bolivian team will have as many chances as they had at home, so we believe the result will be under 2.5 goals.

In the Copa Libertadores group stage, The Strongest only scored one goal in their three away games, and when they played in Brazil they failed to put the ball in the net. For this reason, we hope that Ceara can keep a clean sheet.

Decisive Matchup In Brazil – Ceara vs The Strongest Preview

In the final part of the first leg, the face of coach Marquinhos Santos changed completely, after his team was finally able to score on a couple of occasions against a Bolivian defence that had been solid up to that point. Vozao will have a home advantage and enter the second leg already with one foot in the quarter-finals. In Brasilerao the coach rested some players who had action in Bolivia. Despite starting with a lead, Internacional managed to draw, which means the fifth consecutive draw in the tournament.

El Tigre started the Bolivian Clausura tournament and the Copa Sudamerica knockout phase in the same way, with an adverse result. In the continental tournament, the club coached by Cristian Diaz had a good game, in which they managed to cut off every offensive move proposed by Ceara. However, all the work was marred by two defensive lapses that allowed Ceara to turn the result around. On the other hand, The Strongest debuted in the local tournament with a 3-0 defeat.

Previous Analysis of Ceara vs The Strongest Stats and Odds

If you want to bet on the top odds for Ceara vs The Strongest, check our selection of odds from the best betting sites:

FAQs for Ceara vs The Strongest 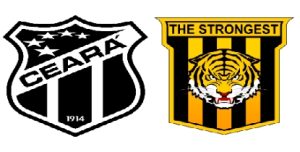 Who is the host? The match will be played at José Pinheiro Borda Stadium in Porto Alegre, Brasil

Who is the bookmakers’ favorite to win? The more probable winner is Ceara at 1/3 (1.33) odds