This is the preview for the Burton vs Oxford fixture, and you can find all the best betting tips and odds for the match below. If you are looking for more League One betting tips, you can check out our website.

Latest Odds, Betting Tips, and Predictions for Burton vs Oxford

We reviewed the match and both teams’ histories for the Bolton vs Oxford match this weekend.

Keep in mind that all odds are from Ladbrokes and are subject to change. Review your bet slip before continuing with the bets.

Recently, Oxford has prevailed multiple times against Burton, including three of the four times they played together. They may be one point behind Burton, but they also played one match less than Burton in League One because one of theirs was postponed. Both teams’ recent form is similar and we can safely say that we are betting on Oxford to win because they have done it in the recent past.

Who Will Secure the Three Points on Saturday?

Both teams are currently placed below the play-off positions in the League One table, but a win for either of them might be the thing needed to get to the play-offs, but keeping that position in the future will require a good form. Oxford will most likely take the three points and the game will almost certainly have a lot of goals in it. That is according to the recent head-to-head data between the two teams. There aren’t any injured or suspended players on both squads, so they will be facing each other at 100%.

In the tables below, you can see the most relevant and recent head-to-head data for Burton vs Oxford before their match this weekend. 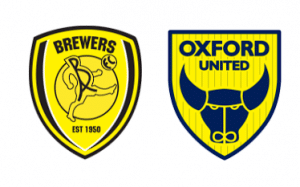