Let’s go over the Burton vs Lincoln match this weekend and find the best odds and predictions for you. If you are interested in seeing more League One betting tips, don’t hesitate to visit us on our website.

We have listed the top predictions and free betting tips for the upcoming fixture between Burton and Lincoln below.

All odds are correct at the time of writing and from Betfred. If you will place any of these bets, make sure that the prices haven’t changed before doing so.

Although Burton is higher than Lincoln in the League One table, for now, with a four-point difference, we believe that Lincoln is in better form. They won or drew three of the last five matches they played, while Burton lost or drew all five of their last fixtures. Also, Lincoln is at an advantage when it comes to Burton because they won four of the last five head-to-head fixtures against them, including two of the last three away games they played against Burton.

Lincoln is lower in the table, but not getting relegated anytime soon unless they start a losing streak. Playing against Burton shouldn’t be a problem for them considering that Burton hasn’t won a head-to-head game against Lincoln since 2011. Also, there are no injured or suspended players on the team roster.

Burton also doesn’t have any injuries or suspended players, but that is the only thing they have going for them right now. They have a negative head-to-head history with Lincoln and their recent five matches consist of draws and losses.

In the tables below, we can check out the latest odds, and head-to-head data for the upcoming Burton vs Lincoln match this weekend.

Burton vs Lincoln: Common Queries Regarding the Fixture 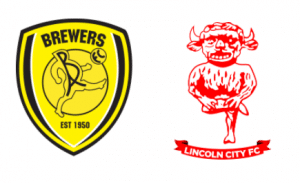