Matchday 3 will relive the final of the last tournament, just a month ago these two teams faced each other to define the Argentinean champion. On that occasion Boca was the winner, will Tigre be able to take revenge at La Bombonera?.

Our Latest Betting Tips and Predictions for Boca Juniors vs Tigre

To set the right bet for Boca Juniors vs Tigre, read about our predictions and betting tips for free:

The Xeneize dominates the history of recent duels against Tigre, Boca has won 3 and Tigre only 1. Their most recent duel was the final of the Professional League Cup, in which Boca won with a resounding 3-Nil. Even though Boca came from a loss in the last round, they have shown that they are maintaining the level of the last tournament, and their next game will be at home. We predict that this match will end similarly to the final.

In 8 of the Xeneize’s last 10 matchups, the total goals have been Under 2.5. Coach Batagglia’s successful formula in the last tournament was to concede few goals and score enough to win each match. Although they have already conceded goals in their first two matches, we expect the home side to have no defensive lapses against Tigre and a low-scoring game.

Tigre has had problems opening the scoreboard and scoring, and we think this problem will be even more evident against Boca Juniors. The last tournament final was played in a neutral stadium, and Tigre was unable to score, this time Boca will be playing at home and maybe a bigger obstacle for the visiting team.

Sebastian Batagglia was very unhappy with his team after losing to Central Cordoba, in a game that they dominated from start to finish, and had multiple opportunities to go up on the scoreboard. However, the Xenezes players missed one after another in their search for a goal, leaving a lot of spaces in defense, which their rival took advantage of to score. The coach hopes that his players have learned their lesson and that in future matches they will not be overconfident.

The opportunity for revenge has come sooner than Tigre thought. Last month, the championship cup slipped away from El Matador, and in the worst possible way, as it could do little against the 3 goals scored by its rival. At the moment El Matador is third in the standings and hopes to get a new victory to get even with Boca and at the same time get closer to the first place.

A brief review of Boca Juniors vs Tigre stats and odds

If you want to bet on the top odds for Boca Juniors vs Tigre, check our selection of odds from the best betting sites: 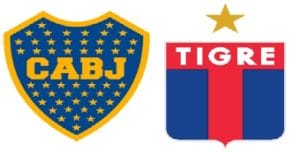 Who is the bookmakers’ favourite to win? The more probable winner is Boca Juniors at 4/5 (1.80)