After the recent setback against Sporting Lisbon, Estoril travel to the Estádio do Bessa Século XXI for a game against Boavista, who have just witnessed a strong performance in the Taca da Liga group stages.

After three winless games, Boavista beat Pacos Ferreira 2-1 away from home to move into the top spot of group C in the Taca da Liga. Estoril suffered a setback after three consecutive wins in the league, as they lost 1-0 to Sporting CP at home.

Estoril might have suffered a setback against Sporting CP in the latest league match, but the overall form continues to be very good. Boavista have been through a string of draws and it took an impressive comeback from the team to get a win over Pacos Ferreira in the recent game. Estoril are unlikely to give up their strong league position with a second consecutive disappointment. After having picked up just one win away from home against Boavista in the last four attempts, Estoril would be keen on putting this record straight.

Estoril have not scored in the last two away games against Boavista, but their recent form has been quite good with nine goals in the opening six matches. At the other end, the team has been very stringent and they have conceded only four goals.

Boavista have been able to score in five consecutive matches across all competitions. The team is also quite good when it comes to scoring at home against Estoril, whose clean sheet record has taken a tumble with goals conceded in the last four outings.

Boavista have turned in some impressive performances of late, but the team is being the price for mediocre starts. In the last four matches that have yielded just one victory, Boavista have taken the lead only on one occasion. Reggie Cannon and Yanis Hamache are unavailable due to injuries. Javi García and Tiago Ilori are doubtful for the game.

Estoril have so far been able to enjoy a lofty position in the Portuguese league standings, but the recent loss against Sporting CP has left the team on the cusp of losing this status for the time being. Estoril have to quickly recover from the loss with tough games coming up in the next four.

Analysing the Stats for Boavista vs Estoril

FAQs on Boavista vs Estoril game 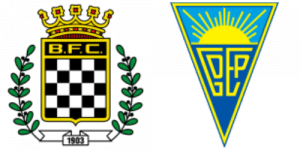