Benfica are back in domestic action when they take on Portimonense at the Estádio da Luz. This preview will take a closer look at this Portuguese Primeira Liga action between the two teams, who are separated by 10 points.

Benfica produced a spectacular performance to move a step closer towards Champions League qualification after beating Barcelona 3-0 at home. Last weekend, the team beat Vitoria Guimaraes by a 3-1 score. Portimonense were unable to build on from the win over Santa Clara after being held to a goalless draw by Vizela at home.

Benfica have been in excellent form over the last few games and the confidence only gets better after beating Barcelona by a handsome score. Portimonense have been mediocre throughout the season but the team has lost only once in the recent five matches. Despite this confidence, it is very likely that Benfica will be able to get a comfortable home victory.

Benfica have found a brilliant scoring touch over the last few games. Even though the first Champions League group game against Dinamo Kiev finished as a goalless draw, Benfica have been able to get over 2.5 goals in the four of the last five matches. Even if Portimonense are not among the goals, this match could produce a decent string of entertainment.

Portimonense were unable to find the back of the net against Vizela but the team has scored in all of their away games so far this season. Benfica come into the game without a clean sheet in three out of the last four league matches.

The much awaited Champions League game against Barcelona finished in a very positive fashion for Benfica, who are already dreaming about qualification to the next round following the impressive victory. The focus gets back to the league action where Benfica have been able to build a four-point advantage. The team will be without Haris Seferovic, Valentino Lazaro., and Diogo Goncalves due to injury, while Mile Svilar is doubtful.

Portimonense are just outside the top five places despite a mediocre start to the season. Over the last few matches, the team has shown a resilient nature to avoid defeats. However, replicating the same mentality against the table leaders will be very difficult. Ricardo Ferreira and Shoya Nakajima would be the players unavailable for the visitors.

Analysing the Stats for Benfica vs Portimonense

FAQs on Benfica vs Portimonense game 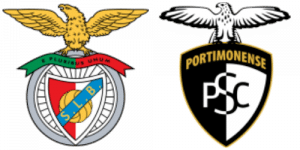 Where is the match going to take place? Estádio da Luz in Lisbon