This Portuguese league game preview focuses on the match between Belenenses and Tondela at the Estádio Dr. Magalhães Pessoa. This is a game involving two struggling outfit in the division.

Belenenses remained just outside the bottom of the table following the 2-2 draw with Pacos Ferreira away from home. Tondela finally managed to stop a string of defeats by getting a narrow 3-2 win over Famalicao at home.

Belenenses to win the game

Even though Tondela come on the back of a first victory since the opening game of the season, it is difficult to back the visitors after a string of losses. A home game would probably swing the balance in favour of Tondela. However, they have quite a poor record against Belenenses with four losses and no wins in the last six meetings against this club.

Belenenses have found themselves in the bottom three owing to a lack of goals with the opening seven matches returning just five goals. However, the team could benefit from facing a Tondela outfit who have one of the worst defences in the division with 14 goals conceded. This means an average of two goals per game from the visitors.

Tondela have not kept a clean sheet since the opening game of the season. This translates into an average of over two goals per game conceded in the last six. Belenenses are also a team not known for the clean sheets with just one in the last five.

A home game beyond the best hopes for Belenenses to pick up the first win of the season. After having lost only three games so far this season, Belenenses will be reasonably confident about getting that elusive victory that would finally lift them away from the bottom three. However, the pressure will increase the longer the wait for the victory goes. Sandro and Yaya Sithole are the players unavailable for Belenenses boss Armando Petit.

Tondela would be mightily relieved to have picked up the victory over Famalicao that has driven the club up in the league table. After having found themselves on the 16th spot only a few games ago, Tondela now have put a decent buffer between them and the bottom three. Jota Gonçalves is the only injury worry for Tondela boss Pako Ayestarán.

Analysing the Stats for Belenenses vs Tondela

FAQs on Belenenses vs Tondela game 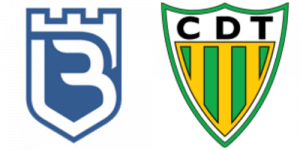