This is a preview of the Ligue 2 match between Bastia and Amiens at the Stade Armand-Césari. Bastia manager Régis Brouard goes in search of his first victory since taking over almost a month ago. This will be a crucial match in the battle to avoid relegation from the second division of French football.

Bastia fell to a 1-0 defeat against Auxerre in the recent league match. This midweek defeat happens to be the second loss for Bastia in the last three games. Amiens picked up a first victory in nine matches after managing to overcome their weekend opponent’s Valenciennes by a three-goal margin.

Bastia are yet to score a goal under the regime of Régis Brouard. The team has kept themselves in contention during most of the games but they have not offered a lot of that going forward. The lack of goals has been a problem for Bastia throughout the season but the goal difference is not so bad. Amiens have a one point advantage over Bastia but they could jump to even 14th place in the table depending on other results.

This is a game between two teams who have been very poor going forward. The two teams have managed a combined 13 goals in the last six matches. This happens to be among the lowest in the segment. A game between such teams, who have a lot at stake in terms of relegation, may turn out to be a low scoring match.

Bastia are yet to score since Brouard took charge from caretaker boss Frédéric Zago. Meanwhile, Amiens are fresh from scoring three goals last weekend but they have failed to score in the previous two games.

Bastia are still gripped with the threat of relegation following the midweek defeat at the hands of Auxerre. There are multiple reasons for Bastia to be concerned about their recent form. The team also has a difficult set of fixtures coming up with matches against the top 10 teams in the next three after Amiens. Maguette Diongue is the only injury worry for the hosts.

Amiens will be able to breathe a sigh of relief after picking up the win last weekend. Since managing an away victory over Guingamp back in the middle of August, Amiens have been plagued by a string of draws and defeats that have left them with a serious threat of relegation. Nicholas Opoku is the only injury worry for manager Philippe Hinschberger.

Analysing the Stats for Bastia vs Amiens

FAQs on Bastia vs Amiens game 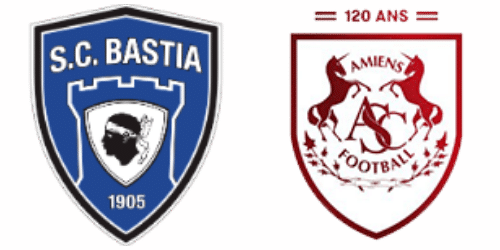