The postponed game between Barcelona and Granada is scheduled for Thursday and a win for Blaugrana would put them over Atletico Madrid on top of the La Liga standings. So, check out our preview of this match and take a look at some of our free betting tips.

Our best free betting tips and predictions for Barcelona vs Granada

The match between Barcelona and Granada can turn out to be crucial in La Liga’s title race, so check out some of our top betting predictions for this game.

Barcelona to Win Both Halves

Our prediction is based on the simple fact that we expect Barcelona to win here, but the odds on the outright win are simply too low. With that in mind, we suggest betting on Barca to win both halves. After all, that is something that happened in five of the last ten Barcelona games. Furthermore, Barcelona has won both halves in two of the last five head-to-head matches against Granada.

With an average of 3.28 goals per game, Barcelona is way ahead of all other teams in La Liga. In second place is, you guessed it, Granada – with an average of 2.94 goals per game. Additionally, three of the last five duels between these teams have gone over 3.5 total goals. So, it’s inevitable that we will see more than a few goals in this game as well. If you want to keep it safe, you can bet on over 2.5 total goals, but the odds are too low on that market for us.

Since we expect Barcelona to win and we also expect to see many goals in this game, we decided to bet on some of Barca’s players to score. Messi is, of course, our first choice, but the odds on him scoring at any time are not enticing enough. So, we would suggest betting on Griezmann to score at any time, especially since he is in good form and he scored in the last three Barcelona games, including two goals for the win in the previous round against Villarreal.

Barcelona vs Granada preview: Can anyone stop Blaugrana?

The home team is rolling right now and they are the main contenders for the title. Meanwhile, Granada is still clinging to the hope of securing European football next season. So, let’s check out both teams in more detail.

With Blaugrana in amazing form and other teams dropping points over the weekend, it’s clear that Barcelona is now the main favourite to win the title in the Spanish league. Of course, there are still more than a few games left to play, but Barcelona has been great in the past few months, and they’ve also won Cope del Rey in the process. In the league, they have won 16 of their last 18  games. Meanwhile, Braithwaite, Pjanic, Coutinho, and Fati will most likely miss the upcoming game.

After the historic success in the Europa League, the team from Granada is trying to get to the same competition once again. However, they are already more than a few points behind and with only six games left for them to play, it’s going to be a tough task – especially with the schedule that forced them to play Sevilla and Barcelona in a few days. The team has been inconsistent lately, with four wins and four losses in the last eight league games. Duarte, Lozano, and Milla are injured and doubtful for the Barcelona match.

Top odds and useful stats for Barcelona vs Granada

If you want to bet on the best odds for Barcelona vs Granada, check our selection of odds from a few different UK bookmakers: 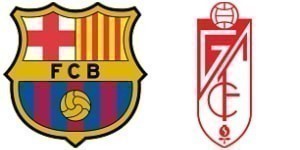