It seems that Union La Calera is condemned to last place in the Chilean league, although in the Copa they are top of Group C. Banfield is last, but with a win, they could overtake their rivals in the standings.

To set the right bet for Banfield vs Union La Calera, read about our predictions and betting tips for free:

The first half of the group stage has not been as expected for the Argentinians, who after winning on the first matchday, have lost their last two away games. They will have the opportunity to play in front of their home crowd again and will be hoping for a win to add to the excitement of this tight group.

We think the home advantage will carry a lot of weight in the match, and Banfield will get the win with some difficulty.

The teams in Group C have one of the lowest scoring averages in the tournament Union La Calera led the way with only two goals scored. Banfield has scored only once, so we expect a short result with one or two goals.

The hosts have managed to put the ball in the net in their last 3 home games. On the Contrary, Union La Calera has only scored away from home once in their last 4 visits.

Taking into account these facts, we assume that only the Argentinians will manage to open the score in this match.

Banfield vs Union La Calera Preview: from the bottom to the top in a single game.

In the last two rounds of the Argentinean First Division, Banfield had shown a slight improvement, and their intentions to fight for a place in the quarter-finals were evident. They achieved a great victory against Talleres de Córdoba and drew against group leaders Racing Club.

The last draw, in their visit to Avellaneda, was not good enough and they had to say goodbye to the qualification places. The Argentinian club will now focus on the continental competition.

Unlike the Argentinian club, Unión La Calera had a full week to prepare for this match as the Chilean league had no action. Their last match was the third matchday of the Copa Sudamericana against Santos, where after starting with a goal from the Brazilians, the Cuementeros would immediately equalize the match.

The most relevant aspect of this match, which ended in a 1-1 draw, were the few clear chances that Unión La Calera and Santos had. The Chilean team had most of the ball possession but was unable to convert this into goals.

If you want to bet on the top odds for Banfield vs Union La Calera, check our selection of odds from the best betting sites: 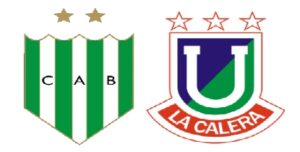 Who is the host? Banfield is the host at Florencio Sola Stadium in Banfield, Argentina

Who is the bookmakers’ favourite to win? The more probably winner is Banfield