The reigning champions have a new coach for the first time, but they have lost for the third time in a row. The visitors have now gone six games without a win in a row and are at the bottom of the standings.

The Best Predictions and Betting Tips for Banfield vs San Lorenzo

To set the right bet for Banfield vs San Lorenzo, read about our predictions and betting tips for free:

3 draws and 1 win for Banfield are the results of the last 4 meetings between the two clubs. El Taladro only has 4 points playing at home, the same as El Ciclon playing away. We think that this match will be very close and that neither of them will take advantage of the other.

In their last 3 meetings, they have scored a total of only 2 goals. In fact, in 2 of those matches, there were no goals. For that reason, we deduce that the number of goals will be low or even nil.

The games between these two teams are characterised by being very defensive, this is reflected in the last 3 meetings, where there were only goals in 1 of them. We think there will be at least 1 clean sheet, in fact, neither team may score.

El Taladro is motivated after having advanced in the Copa Argentina by defeating Union, the same opponent of the last matchup of the league, which had a different ending. On the previous matchday, Banfield hosted Union at home, one of the most exciting games of the day.

The ball was in Banfield’s possession for 65% of the match, and this was converted into scoring chances, which ended with 19 shots, albeit with some impressions. The Taladro’s constant attacks left gaps in their defensive zone which were exploited by Union, who scored more goals with fewer shots.

After four draws and one defeat, El Ciclon was able to achieve its second victory of the championship, and also move up from the bottom of the table to 15th place. In their last match, they beat a tough opponent, the current Argentinean champion, Boca Juniors.

Ruben Insua’s approach was ideal to hurt the Xeneize team, who are struggling after the bad results of the last few weeks. Although Boxa took an early lead, Agustin Giay equalised, then in the second half, Adam Bareiro scored the second and then missed a penalty, which could have made it 3-1.

The Latest Review Of Banfield vs San Lorenzo Stats and Odds

If you want to bet on the top odds for Banfield vs San Lorenzo, check our selection of odds from the best betting sites: 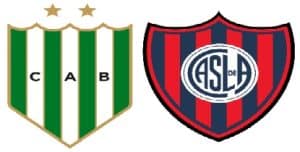 Who is the bookmakers’ favourite to win? The more probable winner is Banfield at 10/11 (1.91) odds