One of the most anticipated games in the upcoming round of Ligue 2 is the Auxerre vs Pau duel, so check our preview of this match to learn more about it and to get some free betting tips.

Our top betting predictions and picks for Auxerre vs Pau

If you are not sure what is the right bet for the Auxerre vs Pau duel, check our top betting tips for this match:

The last two most recent duels between Auxerre and Pau have ended with wins for the home team, so we expect the same to happen in their upcoming game. After all, Auxerre is the better team on paper, they are in better form and ahead of Pau in the standings, and they are playing at home. So, our prediction is for Auxerre to win this game.

Both h2h duels between Auxerre and Pau last season have gone over 2.5 total goals, so we wouldn’t be entirely surprised if that happens again. In addition to this, Auxerre is averaging 2.50 goals per game this season, which is the second-best average in the league. That being said, Pau only averaged 1.86 goals per game so far and betting on over is always a risk in Ligue 1 – but we still like this bet.

Auxerre to Score the First Goal

The best odds, stats, and more for Auxerre vs Pau

If you are looking for the best odds for Auxerre vs Pau, check our list of odds taken from the premier UK betting sites:

Auxerre vs Pau preview: Can the guests put up a fight?

The team that currently third in the French Ligue 2 has clearly doing very well so far in the season and they’ve been in solid form recently as well. However, Auxerre suffered a devastating 6-0 loss to Toulouse a couple of weeks ago, but they managed to get back to the right track straight away with a win over Bastia. So, the team is obviously resilient and if they can get a win over Pau, they will be in good position going forward.

Although they are not such a well-known name to football lovers outside France, Pau is doing well this season in the second-tier French competition. After fourteen rounds, Pau has six wins, three draws, and five losses, which is enough for the eight place in the league. Also, the team has won two of their last three matches, so they are in good form recently. 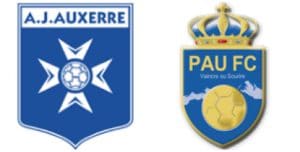