5 wins in a row and 10 matches unbeaten are a great motivation for the team at the top of the table. The visitors have lost 2 matches in a row, but they will try to give their rivals a hard time.

To set the right bet for Atletico Tucuman vs Newell´s Old Boys, read about our predictions and betting tips for free:

In this tournament, the home team has not lost in any matchday, in fact they have 5 consecutive victories. The away team has lost in the last 2 rounds but the last time they faced Tucuman, La Lepra won 4-0. It is possible that this match will end in a draw.

Tucuman’s defensive solidity has been the secret of their success in the tournament. In 10 games they have conceded only 3 goals, that’s why during almost all their games there are only 1 or 2 goals on the scoreboard. That is why we expect few goals, even a goalless draw.

The home team has conceded the fewest goals in the tournament, in fact they have not conceded a goal in the last 5 games, all of which they won. We deduce that this time some of the two teams will not score.

El Decano has remained faithful to its style, and since the start of the tournament, the players have been performing better and better. Coach Lucas Pusineri is pleased with the way his players are performing on the pitch.

In their last match, Tucuman was convincing and took the lead in the first minute with a goal from Augusto Lotti. Independiente had more possession and more shots, but El Decano had clearer chances. The result did not change and Tucuman won 1-0.

Despite going behind after only 5 minutes, Newell’s had countless chances to equalise. La Lepra’s players wasted chance after chance due to their lack of precision. In 2 matchdays Newell’s went from being leader to ninth place.

If you want to bet on the top odds for Atletico Tucuman vs Newell´s Old Boys, check our selection of odds from the best betting sites: 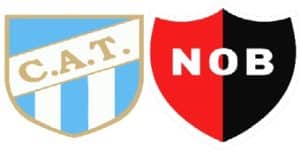 Who is the host? Atletico Tucuman is the host at Monumental José Fierro Stadium in San Miguel de Tucuman

Who is the bookmakers’ favourite to win? The more probable winner is Atletico Tucuman at 11/10 (2.10) odds