The host is coming from a draw in their previous match and will be looking for a home win to climb the standings. El Lobo remains one of the five undefeated teams in the Argentine league and now hopes to win away.

To set the right bet for Atletico Tucuman vs Gimnasia La Plata, read about our predictions and betting tips for free:

The visiting team has 12 consecutive matches without defeats. We think that El Decano will not be able to cut the positive streak of its rival, and will fall defeated.

In the last 5 meetings, the final result was under 2.5 goals. In 7 of Gimnasia’s last 8 matches, the result was also under. Only in 1 of 8 Tucumán games, the score was high. So we expect few goals in this duel.

The key to the good performance of both teams has been their defensive work, as they tend to concede few goals. Gimnasia has 3 consecutive clean sheets. So we expect only one to score.

Despite being one of the few teams that remain undefeated so far in the tournament. The number of draws does not favor the Decano, which is in 9th place.

The 3 points obtained last week against Vélez were important in order not to move too far away from the top of the table. Manuel Capasso scored in the 18th minute for Tucumán and from then on the result did not change.

At the end of round 6, Gimnasia La Plata is the new leader of the Argentine Professional League. Four consecutive victories, in two different tournaments, took El Lobo to 14 points, and it also advanced to the next round in the Copa Argentina.

In their last game, Gimnasia faced one of the bottom teams of the tournament, Defensa y Justicia, but they were a very tough opponent. Both teams had many shots without much success, until Tomás Muro, who had just over 10 minutes on the field, scored in the 78th minute for El Lobo to take the 3 points.

If you want to bet on the top odds for Atletico Tucuman vs Gimnasia La Plata, check our selection of odds from the best betting sites: 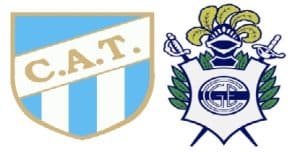 Who is the host? Atletico Tucuman is the host at Jose Fierro Stadium in San Miguel de Tucuman

Who is the bookmakers’ favourite to win? The more probable winner is Atletico Tucuman at 27/20 (2.35) odds