The second round of the Brazilian Serie A starts with an interesting duel between Atletico Goianiense and Sao Paulo. If you want to find out more about this game, read our in-depth preview and get some betting tips along the way.

Our free predictions and tips for Atletico Goianiense vs Sao Paulo

If you are struggling to decide what is the best bet for this match, check our favourite betting tips and you might find the bet that you like after all:

The guests are without a doubt the better team of the two, which is why they are the favourites according to bookies. However, the home team is in much better form and if they didn’t play Sao Paulo, we would expect them to win the game. But, their current form pitted against the sheer quality of the Sao Paulo team makes us think that this game could end in a draw. Furthermore, Atletico has drawn three times in their last five matches in all competitions, while Sao Paulo has done it twice.

Atletico Goianiense and Sao Paulo to Draw at Half Time

We predicted a draw at the end of the game, so our second prediction is a draw at half time since most games that are even at the end are also equal after 45 minutes. In addition to this, both teams have drawn at half time in three of their last five games across all competitions and we expect this trend to continue in the second round of Serie A.

These two teams have scored and conceded a total of just one goal after the first round of the Brazilian league, so we don’t see both teams scoring in this game either. Furthermore, three of the last four head-to-head duels between these teams have ended with one team not scoring, so that’s not unusual for their matches.

Atletico Goianiense vs Sao Paulo preview: Can the home team get the second win in a row?

Both teams enter the second round of Serie A looking for a win – Atletico to keep their run going, Sao Paulo to get back on track after losing in the Brazilian Cup. So, let’s take a closer look at both teams:

The win in the first round of Serie A against Corinthians was surprising to many, but Atletico Goianiense has been playing well before the start of the league, both in the regional championship and in Copa Sudamericana, although they’ve fallen short of winning the group and getting to the next stage in that competition. The team also beat Corinthians in the Brazilian Cup, once again away from home, just a few days after that first-round duel. All in all, Atletico is without a loss in the last five games in all competitions and they have a clean bill of health at the moment.

After getting to the next stage of the Copa Libertadores, Sao Paulo didn’t start the new season in domestic competitions that well. First, the team failed to win in the first round of Serie A on their own court after drawing with Fluminense in a match without any goals. Then, Sao Paulo lost in the first leg of the third round of the Brazilian Cup. The 3-2 loss came against 4 de Julho, a team that plays in Serie D, the fourth-tier league in Brazil. Dani Alves and Walce are injured and won’t play in the upcoming match.

The best odds and stats for Atletico Goianiense vs Sao Paulo

If you wish to find top odds for Atletico Goianiense vs Sao Paulo, take a look at our selection of odds from the best UK bookies: 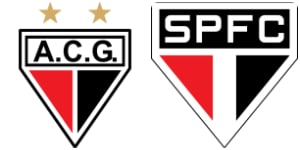