Neither team is going through a great moment in the first division of Brazil, so this duel will serve to settle a season with a lot of irregularity. both teams are on a four-game winless streak, which they must end if they are not to jeopardise their chances of winning. To set the right bet for Atletico Goianiense vs Sao Paulo, read about our predictions and betting tips for free:

Although the visitors have had some poor results in their last few games, they have shown themselves to be a team with the ability to generate a lot of scoring chances, they have just lacked the finishing touches. On the other hand, the home side tends to lose possession of the ball and sit back to prevent their opponents from attacking.

We expect Sao Paulo will come away with all three points, as has happened in the last two h2h, on both occasions Sao Paulo won 2-1, playing first away and then at home.

Although Sao Paulo won the last two matches against Goianiense, each match was very even, with both teams scoring goals in each match, resulting in an overall score of over 2.5 goals. In recent matches, the defensive fragility of both teams has been exposed, as they frequently concede goals.

The home team has three consecutive clean sheets, while the visitors have four. This increases the odds of a BTTS in the first leg, Goianionese has two of the three strikers included in the Team Of The Week for the last round of the Copa Conmebol Sudamericana.

Duel Of Teams From The Brasileirao

Eduardo Baptista’s team is sinking in the Brasileirao, where it occupies the penultimate place at the table. After being eliminated in the quarter-finals by Corinthians, the only thing that can save a season full of dismal results would be to win the Copa Sudamericana. With the low level, they have shown in the last few games, it will be difficult for them to pass their next test.

Tricolor Paulista had a terrible week as they crashed out in the semi-final of the Copa do Brasil after losing 3-1 to Flamengo. Sao Paolo could not recover from the elimination and immediately fell in the Brasileirao against Fortaleza. With two consecutive defeats in the local league, Ceni’s team said goodbye to their chances of winning the tournament. The only trophy they can aspire to is the continental one, so this will be their priority.

If you want to bet on the top odds for Atletico Goianiense vs Sao Paulo, check our selection of odds from the best betting sites: 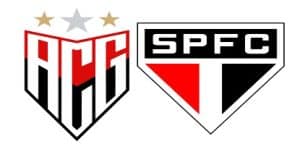 Who is the host? Atletico Goianiense will be the host at Antonio Accioly Stadium in Goiania, Brasil

Who is the bookmakers’ favourite to win? The more probable winner is Sao Paulo at 11/8 (2.38) odds