The last game in the round is also one of the more interesting ones, which is a duel between Atletico Goianiense and RB Bragantino. To learn more about this match, check our preview and betting tips.

If you want to be sure that you have the right bet for Atletico Goianiense vs RB Bragantino, check our top betting predictions:

Although we haven’t seen these two clubs draw often since this happened in just one of their previous five h2h duels, we believe that now is the time for it. Both teams are playing well at the moment and they are in good form, but Bragantino is doing a bit better. So, with that in mind, and the fact that Atletico is playing at home, a draw sounds like a reasonable prediction.

Three of the last five duels between Atletico GO and Bragantino have gone over 2.5 total goals, so we expect to see the same in their upcoming duel. That being said, Atletico is not among the teams that play high-scoring games this season – in fact, they only average 1.4 goals per game, which is the worst in the league. But Bragantino averages a whopping 4.17 goals per game, so this should even out.

The situation here is similar as it is for our previous prediction – we have seen both teams score in just 20% of Atletico’s Serie A matches, while the same happened in 83% of Bragantino’s games. And, once again, both teams have scored in three of the last five head-to-head meetings between these teams.

With Bragantino leading the league and Atletico being just four points behind them, this match is certainly the derby of the round. So, let’s take a closer look at the teams ahead of their duel:

After the first five games in the new Serie A season, Atletico Goianiense has three wins, one draw, and one loss. So, it’s safe to say that they’ve had a good start since they’re sitting in sixth place in the standings with a game fewer than most teams. In addition to this, the team also eliminated Corinthians to reach the Top 16 of Copa do Brasil. Also, Atletico has a clean bill of health, which is rare for Brazilian teams at this stage.

Somewhat surprisingly, the team sponsored by Red Bull is currently sitting at the very top of the table. After six games, Bragantino has four wins and two draws, so they are also still undefeated – the only team in Serie A that still hasn’t lost a game. The only downside to their season so far is the loss in the third round of Copa do Brasil to Fluminense. Also, Bragantino has a few injured players at the moment, while Hurtado is away with his national team.

If you want to find the best odds for Atletico Goianiense vs RB Bragantino, check our selection of odds from the top UK bookies: 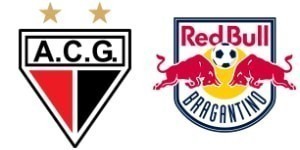