With eight rounds of the Brazilian Serie A gone, America Mineiro is no longer one of the teams without a win. They will now look to build on their success from the last round against Santos, so read our preview of the game to learn more about it and to get a few betting tips as well.

Our free betting predictions, tips, and picks for America Mineiro vs Santos

If you are looking for some help for betting on America Mineiro vs Santos, check our top betting predictions for this game right here:

America Mineiro and Santos to Draw

After America Mineiro managed to win their first game against Bahia in last round, they will enter this match with a lot of confidence, but Santos is in good form as well with two wins and two draws in the last four league matches. Since America Mineiro is the host, the teams seem pretty balanced to us and our prediction is for them to draw.

Only one of the previous four head-to-head duels between America Mineiro and Santos have gone over 2.5 total goals, so we expect to see a similar game on the weekend. Furthermore, America averages 2.25 goals per game this season, and that’s after their seven-goal fest against Bahia in the last round. Santos is in a similar position with 2.00 goals per game, so this should be a low-scoring affair.

America Mineiro vs Santos preview: Can the home team win two in a row?

Both teams are in solid form in the last few games, so the America Mineiro vs Santos duel should be very interesting. With that in mind, let us check the teams out in more detail:

The fans of the newly-promoted side can breath a sigh of relief after their team has won their first game in Serie A against Bahia in the previous round. Now America Mineiro has one win, three draws, and just one loss in the last five matches and they have 6 points overall, which is enough to barely keep them out of the relegation zone at the moment. Luiz Fernando, Santos Aldemir, and Marlon are injured and out of the upcoming game.

With two wins, two draws, and a loss in the last five league matched, Santos is doing a bit better lately and they find themselves in the seventh spot in the standings at the moment. The team that reached the Copa Libertadores final last season suffered many changes before the start of the new season, but they are still doing well. However, the team has five players on their injury list at this time, which could be a small problem.

The best stats and odds for America Mineiro vs Santos

Finding the best odds for America Mineiro vs Santos can take time, so check our selection of odds from various bookies first: 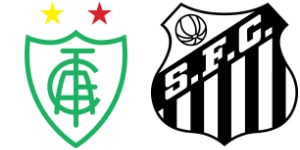