Dive into our detailed match preview for the upcoming League One fixture between Accrington and Portsmouth. For more League One predictions, you can check out our latest articles.

We received our betting experts’ recommendations for the upcoming Accrington vs Portsmouth match this weekend, and here they are.

Portsmouth is in the lower mid-table region right now, and judging by their recent form, they aren’t going to win the match on Saturday. They don’t have any injured or suspended players, but we don’t think that will help them much against a team like Accrington. Especially looking at the fact that Portsmouth hadn’t won a match against Accrington since 2017.

Accrington has had a good run recently with four wins out of the last five matches they played. This and the fact that there have been a few wins against Portsmouth recently suggests that they will claim the three points from the match on Saturday. Even if they have one injured player for the match this weekend, they won’t have a problem against Portsmouth.

In the tables below, you can check out the match statistics and latest odds for Accrington vs Portsmouth on Saturday.

Common Queries Regarding Accrington vs Portsmouth 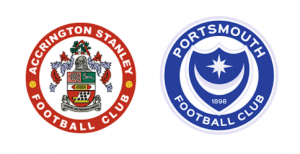