AC Milan vs Man Utd is a European classic, although this time they meet in the Europa League instead of the Champions League as we are used to. In any case, this game offers a lot of betting opportunities, so check our preview and a few betting predictions.

After a tight duel in the first leg which ended up in a 1:1 draw, it is hard to offer a prediction for the rematch. Still, we’ve dug deep and prepared a detailed preview, along with our favourite free tips:

Manchester United is in much better form at the moment, and they have an excellent away record this season. After all, they’ve scored four in an away win against Real Sociedad in the previous round of the Europa League. With that in mind, we expect to see another victory for the Red Devils, although not as convincing as that.

While the first leg of this matchup ended up 1:1, and although both teams have rarely gone over 2.5 goals in their latest matches, we expect to see some goals in this one. First of all, Milan’s defence looked pretty shaky against Red Star in the previous round. Second, Man Utd is supposed to have all of their forwards available for this game. And if Ibrahimovic ends up playing, that’s simply too much firepower on both sides, which should result in more than two goals.

The most constant piece of Man Utd’s offence this season is Bruno Fernandes. The Portuguese midfielder has been in amazing form, scoring 16 goals in the Premier League and adding 6 more in Europe for the club. One of the main reasons for his efficiency comes from the fact that he takes the penalties for the team, but he can also score from play. We expect to see another good performance from Fernandes against AC Milan.

The match between AC Milan and Manchester United should be one of the most interesting duels in this stage of the Europa League. With that in mind, we have done a bit of research into the teams and their current form.

After spending much of the season on top of the Serie A, the Italian giants have seen a dip in form. In the last five league games, they have two wins, one draw, and a couple of losses against Napoli and Inter. The Rossoneri also struggled against Red Star Belgrade in the previous round of the Europa League, only narrowly edging them out without scoring a goal from play. Zlatan Ibrahimovic missed the first leg against his former club, but could still play in the rematch. Meanwhile, Mandzukic, Maldini, and Romagnoli are out for sure.

The Red Devils are playing well at the moment and they are looking to extend their good form in this duel. The team has won three out of their last five games in the Premier League, including an away win against the likely champions and town rivals Man City. They are also looking to get back a few of their key players who were out for a while, although it is not yet sure who will exactly be available for this match. However, it is sure that Phil Jones, Paul Pogba, and Juan Mata are out for the game. Martial, Cavani, and Van de Beek are likely to play.

We know how important it can be to find the best odds for any match, so we have complied odds from a few UK bookies for the AC Milan vs Man Utd duel, along with some important stats: 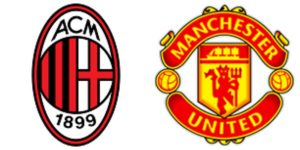