Aberdeen and Hibs; how both of these could do with a win right about now with neither exactly in a great place. Will either side get it? Find out with our Aberdeen vs Hibs preview here along with the predictions and free tips we mention along the way.

Hibs might have lost their last two games but don’t think they’re not a decent side; they are. One of those defeats was against Rangers, the other can be put down as an off day and, even so, they’re the first two defeats of the season. Aberdeen wish they could say that; they’ve lost their last five in a row, have no wins in 10 and have managed just two draws in that time. They’re the perfect opponent for Hibs to bounce back against; Hibs have already beaten them twice in 2021 too.

Our next betting tip is that both teams will find the net in this game. Aberdeen have been in woeful form in terms of results but they have scored in their last three with their total goals scored in that period four goals.  Hibs have scored plenty of goals this season having netted 14 to date. They’ve not been overly defensively sound either in spite of their decent results; they are conceding at a rate of more than one goal per game and have shipped goals in four of their last five.

There will be plenty of goals

In terms of the value these odds offer, this prediction is extremely appealing. The under 2.5 goals bet is fairly heavily odds on at 8/15 in spite of the fact that the last three Aberdeen matches have all gone over 2.5 along with four of the last five Hibs games doing the same. The game averages are both strong too. Aberdeen’s last five have seen a total of 14 goals; that’s 2.8 goals per match. Then you have Hibs; they’ve averaged 3.0 goals per game in their past five.

The best odds for Aberdeen vs Hibs

Aberdeen’s season was not supposed to be like this; it’s been appalling so far and already their outside title hopes are dead in the water. Calvin Ramsay and Christian Ramirez have been their two standout players. If, as rumoured, one or both of them leave in January then things could get even worse.

Hibs will be gutted at losing two games on the spin after going 10 unbeaten; now they need to show the spirit to bounce back. Thankfully, when you’ve got an abundance of attacking threat – namely Martin Boyle, Kevin Nisbet and Christian Doidge – it is only a matter of time until you win a match. Doidge is likely to miss out again through injury.

The final word on Aberdeen vs Hibs 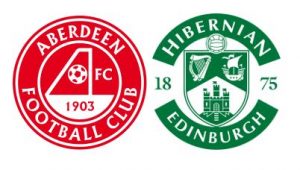