The defending NBA champions are going back to Phoenix for Game 5 in the Suns vs Lakers series. The teams are tied 2-2 at the moment, so Game 5 could prove to be the key to the series. With that in mind, we have prepared an in-depth Suns vs Lakers prediction and preview, along with taking a closer look at the odds, lines, and the best betting tips for this game.

The Best Free Tips and Picks for Suns vs Lakers

The Suns vs Lakers series have so far met our expectations and we could see a lot more excitement in the remaining games. There are many factors that could affect the winner of Game 5 and the entire series, so check some of our top Suns vs Lakers predictions and betting tips: 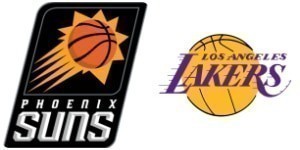 Three of the four games in the Suns vs Lakers series have gone under this line and it seems that the defenses are the main thing that could determine the winner of the series. Both teams have been exceptional on that end of the court, so our Suns vs Lakers prediction for Game 5 is under 207.5 total points.

Another reason why we expect this to happen is the fact that Anthony Davis is unlikely to play in this game after suffering an injury in Game 4. Davis is one of the pillars on defense for Lakers and his absence will be felt. However, the Suns don’t really have a real offensive weapon in the frontcourt and we don’t expect Suns to be able to take advantage on that end. But Davis is also a crucial part of Lakers’ offense and it will be harder for them to score without him. That’s why under sounds like a smart bet to us and we would suggest this regardless of the lines and odds for this market.

This Suns vs Lakers prediction is based on the expectation that Davis won’t play in this game. Of course, Suns definitely have a chance to win even if he does play, but his absence will make things much easier for the home team. Another question mark is Kentavious Caldwell-Pope and whether he is going to play. Although he is far from Davis’ impact, he does give the Lakers more options on offense with his shooting and the ability to spread the floor for LeBron James.

Chris Paul has struggled with injury in the first three games, but he looked much better in Game 4. That is a huge boost for the Suns and if he can play without a hindrance in Game 5, the Suns have a great shot of taking the lead in the series. Paul already said that he will play in this game, so we are taking the Suns on the spread in Game 5 as one of our main picks for the game.

It may come as a surprise to many that LeBron James only averaged 21.8 points per game so far in the Suns vs Lakers series, but if you followed the series from the start it shouldn’t surprise you that much. First of all, all four games of the series have been low-scoring affairs, so it’s not unexpected for James to average that many points since he is also the main distributor on the team with 8.5 assists per game in the series.

Secondly, LeBron James is not on top of his game at the moment since he missed a lot of time near the end of the season with an ankle injury and he is still getting in the rhythm. But if Anthony Davis doesn’t suit up for Game 5, LeBron James will have to take on more scoring responsibilities. With that in mind, our last Suns vs Lakers prediction is for LeBron James to score more than 27.5 points in Game 5.

Suns vs Lakers preview – Can Lakers manage without Anthony Davis?

With the end of the series getting closer, Game 5 could be the one to determine the faith of both teams. The Suns vs Lakers series have been very close so far, so let’s take a closer look at both teams to get to know their situations better.

Despite the fact that the Suns are the second seed in the Western Conference, many experts saw the Lakers as the favorites in the series. However, the Suns have proven in the first four games that they are rightfully in the position in which they found themselves and now they have a chance to take the lead in the series in front of their fans.

Although Chris Paul is still listed as a game-time decision, the experienced playmaker already said that he will play in Game 5. He also looked much better in Game 4 after struggling in the previous two games. The only other name on the Suns’ injury list is Abdel Nader, but he doesn’t get a chance anyway.

The defending NBA champions had to play in a play-in game to get to the playoffs this season, which was caused by lengthy absences of both of their superstars, Anthony Davis and LeBron James. Luckily for the Lakers, both of them have recovered in time for the playoffs, but Anthony Davis got injured again in Game 4 of the series and he is more likely to miss Game 5 than he is to suit up for it.

In addition to Davis, Kentavious Caldwell-Pope is also questionable for this game and it will be a game time decision for both players. Even with both of them playing, the Lakers will have a tough task against the Suns, the team with the second-best record in the regular season. Players like Dennis Schroder and Alex Caruso will have to step up in this game for the Lakers, while Andre Drummond may see a bigger role if Davis doesn’t play.

Who Will Broadcast Game 5 of the Suns vs Lakers Series?

You can watch the Suns vs Lakers game live on TNT, as well as some local TV stations like Bally Sports AZ and Spectrum Sports Net.

When Can I Bet on Game 5 of the Suns vs Lakers Series?

The odds for this game are already out since the game is scheduled for 10 PM ET on Tuesday, June 1st.

Who Is Hosting Game 5 of the Suns vs Lakers Series?

The Suns will host this game at the Phoenix Suns Arena in Phoenix.