So far in the series, the Suns have dominated the Nuggets to go up 3-0. Can the Nuggets get back or will the series end tonight? Read our best Nuggets vs Suns predictions and preview to find out, along with a closer look at the betting odds and lines for Game 4.

Our Free Nuggets vs Suns Predictions and Picks

Game 4 of the Nuggets vs Suns matchup in the Western Conference semi-finals could prove to be the last one, so we have prepared some of our favorite Nuggets vs Suns predictions, tips, and picks for this game:

Odds and lines can change at any time, so remember to check this with your bookmaker before your bet is placed. 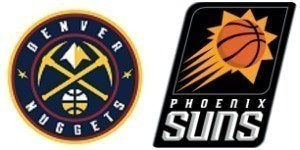 Nuggets to Win on Spread

The Nuggets are one game away from getting swept, which is a surprise to us and to many others. In any case, they are probably going to get eliminated since no team in the NBA history came back to win a series after going down by three games. However, the Nuggets do have enough quality to get at least one win in the series, so our top Nuggets vs Suns prediction is for Denver to win Game 4.

The young forward has been playing like a real star ever since Jamal Murray went down to a season-ending injury, but he wasn’t that great against the Suns in the first three games. Porter also struggled with a back injury in the series, which clearly affected him a bit, especially in the first two games. Still, if the Nuggets are going to get a win in Game 4, Porter Jr. has to play better and be more efficient, so we would suggest betting on him to score more than 18 points.

Many people expected the Suns to get into the playoffs after they signed Chris Paul, but the young team lead by the experienced playmaker took the second seed in the West and is one game away from making the Conference Finals. Like a true floor general, Chris Paul averages 8.9 assists per game in these playoffs, but his average in the first three games against the Nuggets is even better – 11.3 assists per game. Since we expect both teams to be at their best this evening, we would bet on Paul to have at least 10 assists in Game 4.

Game 4 Nuggets vs Suns preview – Are the Nuggets getting swept this evening?

A lot of people are surprised by the current result in the series, and all Denver’s fans are certainly very disappointed. In any case, let’s check out the teams in more detail before the start of Game 4:

After three games of the series gone, it’s pretty clear that the Nuggets won’t be repeating their last year’s success when they reached the Conference Finals. The Nuggets would need to perform a literal miracle since no NBA team ever managed to win a series after losing the first three games. What makes that even more unlikely is knowing that none of the first three games were even close. To top it all off, the Nuggets are dealing with injuries as well, since Jamal Murray and PJ Dozier are unavailable for Game 4.

It may sound unreal, but the young Suns team is one game away from reaching the Western Conference Finals. This would be an amazing success for a team that didn’t appear in the playoffs for more than a decade. That being said, the Suns have been impressive in the regular season and they kept going in the same rhythm in the playoffs. After all, they eliminated the reigning champions in the first round and now they are dominating against the last season’s finalists in the West.

When Will Game 4 Be Played?

Who Is Leading the Nuggets vs Suns Series?

Phoenix Suns are currently up in 3-0 in the series against the Nuggets.

Which Channel Will Broadcast Game 4 of the Series?

This game will be available on TNT.