It’s do or die for the Lakers in Game 6 after losing to the Suns in Game 5 by 30 points! With or without Anthony Davis, Game 6 should give us some exciting basketball. If you want to learn more about this game, check our preview and some of our finest Lakers vs Suns predictions, tips, and picks.

Our Top Free Betting Picks and Tips for Lakers vs Suns

The Lakers vs Suns series have been a rollercoaster, but the Suns enter the crucial games with a boost in confidence after a big win in Game 5. It’s hard to predict what will happen in Game 6, but we have analyzed the odds and lines for this game and prepared some of our top Lakers vs Suns predictions and picks for you: 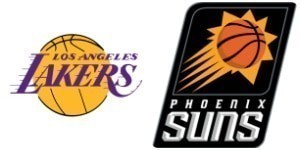 Suns to Win on Moneyline

While the status of Anthony Davis is very important for any predictions, we expect the Suns to get a win in Game 6 whether Anthony Davis plays or not. First of all, even if Davis plays, he will play under duress. If the game isn’t do or die for the Lakers, he would probably miss it, so it remains to be seen how good he can be if he’s playing with an injury.

Secondly, the Suns are riding high at the moment and their confidence was boosted even more after a 30-point win in Game 5. Chris Paul is looking good after struggling with a shoulder injury in the first three games of the Lakers vs Suns series, with Devin Booker providing the majority of scoring for the Suns. But the main reason why the Suns winning is one of our top Lakers vs Suns predictions is their amazing defense in the series.

Four of the five games in the Lakers vs Suns series have gone under this specific line, so it’s an obvious trend that we expect to continue in Game 6, especially if Davis is out once again since the Lakers are not getting anything on offense from the supporting cast right now. In Game 5, Dennis Schroder went 0-9 from the field, Kentavious Caldwell-Pope was questionable due to injury and he only played 15 minutes without scoring, and the two other starters next to LeBron combined for just 11 points.

On the other hand, the Suns finished the game with 115 points and just four players in double digits. The other games in the series were quite similar, so we shouldn’t expect a huge scoring output from this Phoenix team. All of this, combined with the importance of Game 6, suggests that we should see another low-scoring affair from these two teams. So, our second Lakers vs Suns prediction is under 207.5 total points.

Although Devin Booker is averaging 26.2 points per game in the series, which is below the lines for Game 5 offered by most bookies, that should be viewed in the context of the entire series in which we have seen many low-scoring games. Furthermore, Devin Booker scored at least 30 points in three of the previous five games, which bodes well for our third Lakers vs Suns prediction.

The Suns rely on Booker to provide scoring since their other important players like Ayton and Bridges don’t have the same potential on the offensive end. Chris Paul can go off at any time and complement Booker’s scoring output, but he has been dealing with a shoulder injury in this series and he averaged fewer than 10 points per game in the playoffs so far. So, it’s obvious that Booker has to carry the biggest load on offense and that betting on him to score more than 27.5 points is a smart move at any odds.

Lakers vs Suns preview – Will the reigning champions go out in the first round?

The Lakers vs Suns series was tipped as one of the closest before the start of the playoffs, which was proven right even with other series in the West going the distance as well. The next up is Game 6 – the Suns have the lead and the win would put them in the semi-finals of the Western Conference, while the Lakers play to avoid losing in the first round as the reigning champions.

The defending champions are close to getting eliminated in the first round and that would be a huge disappointment. However, it would not be such a big surprise since the Lakers have barely made the playoffs after Davis and LeBron missed a big chunk of games in the regular season and came into the playoffs without playing together in many games. Furthermore, they are playing the team with the second-best record in the regular season, so many expected exciting and unpredictable series.

In addition to all this, the Lakers were without Anthony Davis in Game 5 in Phoenix. The team will host Game 6, but Anthony Davis is questionable for this game as well, although some reports indicate that he will suit up after all. Kentavious Caldwell-Pope was also questionable before Game 5, but he did play, although he was on the court for just 15 minutes. He is probable for Game 6, but still on the injury list for the Lakers.

After failing to make the playoffs for more than a decade, the Suns are finally playing at the biggest NBA stage. Furthermore, they’ve managed to snatch the 2nd seed with great performances in the regular season, which could be crucial in their series against the defending champions from Los Angeles. The Suns have two chances to eliminate the Lakers after going up 3-2, the first one coming in Game 6.

Chris Paul is, once again, listed on the injury report for the Suns and he is a game-time decision. That being said, Paul has played in all five previous games despite struggling with a shoulder injury, so he should suit up for Game 6 as well. The other two players on the injury list are Alexander and Nader, but both of them are not in the regular rotation of the team anyways.

Who Won the Last Game of the Lakers vs Suns Series?

When Will the Lakers vs Suns Game 6 Start?

Where Will Game 6 of the Lakers vs Suns Series Be Played?

Los Angeles Lakers are hosting Game 6 of the Lakers vs Suns series at the STAPLES Center in Los Angeles.